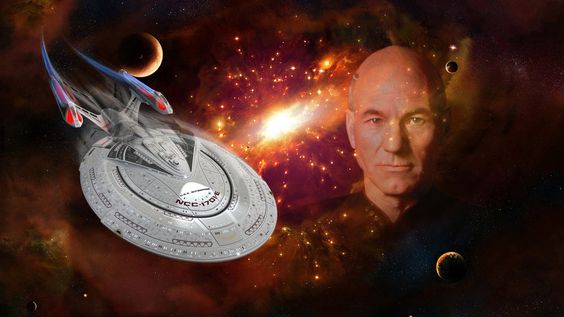 My husband and I are fond of science-fiction and have our little indulgence of watching Star Trek. We started with the 12 movies, then proceeded with the series (starting by The New Generation).

This week we watched a very thought-triggering episode, in season 6. Captain Jean Luc Picard gets the chance to go back to his youth and change a situation he had always regretted and viewed as his greatest mistake. However, when he alters that situation in the past and doesn’t allow himself to do that stupid thing, the future (or present) he returns to is totally altered. His present new self is a crippled version of himself, where he never got to develop his true potential. He then realizes that it was precisely that stupid action what prompted him to mature and face life in a different way, taking action and developing as a human being. So he decides to go back again and let things unfold the way they originally had.

This reminded me of the story of a butterfly and a young boy who wants to help. You see, when a butterfly is born it has to make an excruciating effort to come out of the chrysalis. A boy who saw the struggle had pity on the butterfly and decided to cut open the chrysalis with scissors so it could come out easier. To his dismay, the butterfly came out crippled: never having exerted its body to push its life fluids to the wings, those wings never have the strength to fly.

Most of us have things in our past that we regret: events where we wish we had acted differently, or wonder what if that promising door never had closed on us.

What would my life have been like, if that first boyfriend never had broken off, when I was 18? I was devastated, I was so convinced he was great for me, and we were so much in love. But when I now look back, I realize how different that life would have been. I would probably have moved to Argentina, would never have gone to study at BYU in the States, likely never experiencing success as a business woman in Spain and subsequently as a translator and moving to Sweden. Would it have been better or worse? I cannot tell, but I would certainly not have developed into the woman I am now, who is a perfect match to my current husband. In fact, I do not wish that any of the events in my past “never happened,” because although some were very tough, they helped me mature, and helped me realize what I want and what I do not want in life.

Not long ago we watched the 2013 English movie “About Time,” which also has a very interesting message. A young man is told by his father that men in their family have the ability to travel back and re-live past events in their life. After some playing around to alter events and noticing the sometimes devastating changes this causes, he realizes changing the past most often doesn’t solve things magically. He later gets the advice to live each day twice: the first one just normally, and the second one really paying attention to everything that happens and enjoying every moment. Finally, he decides on something which we all can apply: living each day once, doing your best, and being fully conscious of the beauty, fun and wonder that is surrounding you every single day.

May we all live each day to its fullest and do our best, trusting the process that will take us to the best version of ourselves.

As the saying goes, “The past is history, the future is uncertain, and the present is a gift – that is why it is called a present”.

* = Latin expression which means seizing the day and maxing out the present moment.